Nutribullet seems to have ruled the majority of the market recently being a commercially pleasing mini blender that does deliver and it delivers very well. The popularity of the Nutribullet has inspired other manufacturers to launch similar products. The Nutri Ninja (VIEW PRICE HERE!) is a good rival to the Nutribullet.

Both machines are very good and very powerful in what they do. They have affordable price points and both will work towards giving you a healthier diet (depending, of course, on what you put inside it!). 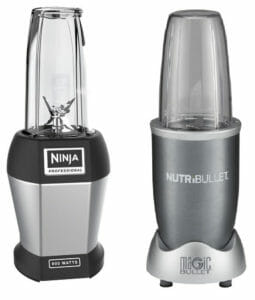 For the money you pay you do get more power with the Ninja, by a whole 400 watts. This is a fair amount more muscle to crush your veggies, frozen foods, ice and whatever else you decides to put in there!

The blades of The Nutri Ninja are clearly more “dangerous” looking In that they are less flat compared to The Bullet. Which is a good thing as it will do more damage when blending your food In less time.

For the power alone I am leaning towards the Nutri Ninja, the smoothies it makes are noticeably smoother. It is a fair amount more power for the little in price difference.

Blending nuts especially; you can notice the difference as you can taste the skin texture in the smoothie made by the Bullet. With smoothies by The Ninja, you hardly notice any skin in the drink. This, of course, goes the same for foods like cucumber with the skin.

I also like to blend some ginger in my drinks along with some actual turmeric chunks. These have amazing health benefits and the ginger definitely adds kick to the flavour! Again, here The Ninja wins again. It liquefies it exceedingly well, you barely notice the fuzziness of the ginger root. With the Bullet, again it does a decent job but you notice the fibres of the ginger as you drink the smoothie. The drink produced by The Bullet was also a fair bit thicker than one The Ninja made.

Celery is another good test as it contains coarse fibres. Again The Ninja does a fine job where the Bullet is left slightly behind. Not anything to complain of but the smoothie made by the Bullet was a little more “fibrey” (if thats a word?!).

My only concern for The Nutri Ninja is that you have to hold down the blender for it to keep blending. You let go and it stops. You cant just set it to blend and do other things. This is a luxury that, if you had ever used the Bullet, you would certainly miss. This may not be a deal breaker for most people, its certainly not for me!

To be fair, because you are able to walk away from the Bullet while it blends; you can leave it to blend for longer (compared to if you were to stay and hold down The Ninja while it blends). Depending on what it is you are blending, this can make the smoothie almost as smooth as if The Ninja had blended it for half the time.

The size of the largest jug between the two blenders is not too far off; The Nutri Ninja at 650ml and The Nutribullet at 700ml.

The Nutribullet has one speed setting which is great for what it does. With this speed setting you can pretty much blend anything quite well.

The Nutri Ninja has two speed settings going for it along with a “pulse” setting to boast of! A regular speed, a turbo speed and the pulse setting which is where it will liquify ice, frozen fruit, skinned vegetables as well as nuts etc. with skin.

Both machines will crush ice very well, they are both great for those cool summer drinks. Again, The Ninja will give you finer and smoother drinks simply because it is a more powerful blender.

Check customer reviews right now at Amazon. Please note: prices on Amazon are subject to change and usually increase, so if you see a bargain – grab it!