Blenders, food processors, what’s the difference, right? Wrong! When it comes to selecting which kitchen appliance is best suited to the task at hand, there are actually nuances which can lead to

staggeringly different results. If you’ve ever been frustrated with watching solids bounce around your blender, constantly missing the blades, then you’ll understand. Likewise, attempting to make a nutritious smoothie in a food processor will inevitably end in a lumpy mess.

Whilst it is true that both of these kitchen appliances use sharp spinning blades to manipulate food, they are actually designed for quite different purposes. For situations where textures and flavours need to be carefully engineered, it is actually incredibly important to select the right device for the task.

Generally speaking, ‘blender versus food processor’ boils down to the simple decision between liquid versus solid. The way in which each machine is designed is engineered specifically to facilitate one or the other. The shape, blade positioning and size are all features which vary in important ways which affect the results of both blending and processing.

Whilst blenders are suited to certain tasks, food processors are more adept at others. Although there are plenty of tasks which can technically be completed by both appliances, one is usually better at it than the other.

Food processors are suited to heavy duty tasks related to food, including things such as shredding, slicing, chopping, pureeing and mixing. Tasks such as slicing and chopping vegetables or nuts, shredding cheeses, or mixing dough are all achievable through the use of a food processor. With such a wide range of functions available with a food processor, they are an invaluable tool in the kitchen for those who love to cook complex meals. 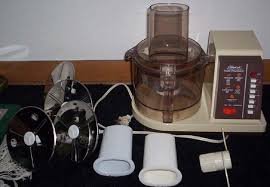 These devices are very handy in the kitchen as they make quick work of kitchen tasks that would usually be labour intensive and time consuming. When you are attempting to whip up a complicated dish but are simply running out of time, a food processor can be the helping hand you need to get it all done by dinnertime. They are great for reducing the manual work that comes with preparing food such as kneading bread, chopping onions, mincing garlic and grating cheese. They can also accomplish other tasks that are near impossible by hand.

They usually come with a large, flat mixing bowl with two large blades set at different heights. This allows them to chop from the base and the centre, which allows them to pulverize solids into small pieces without liquidising them. They often come with a range of different sized bowls, with the largest one tending to have a larger capacity than blenders. In order to complete the various different functions, food processors usually come with a number of interchangeable blades. Often, ingredients can be added whist blending by opening a hole in the lid.

On the other hand, blenders are commonly associated with processing liquids to create things like smoothies, shakes, juices and batters. Some even come with a screw on cup blender, which can be taken of and transformed into a carry cup for use on the go. 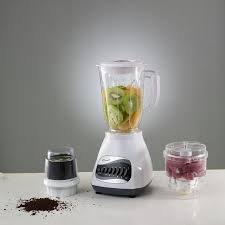 Blenders tend to come in a jug shape with a spout for pouring, making them ideally suited to creating liquidous products. The blade is usually located centrally within the base of the jug, which causes solids to be dragged down into a vortex as it spins. In this sense, they are designed specifically to spin solids into liquid form. If there is not enough liquid in the jug then the solids are unlikely to be pulled into the centre and will instead be left whole.

Blenders also tend to be a lot taller and slimmer than food processors to make up for the fact that liquids have a tendency to splatter upwards when they spin. This means that there is a smaller space in which the ingredients come into contact with the blades.

For those who have little time to cook and would rather blend up a protein shake or smoothie and be out the door, a blender can make the perfect kitchen companion. Most blender recipes require little prep and can be completed in minutes without any need for cooking or secondary steps.

Blenders are often utilized for ice crushing and at the higher end can even come with settings for creating ice cream, soy milk, almond milk and nut butter. They also lend themselves to other liquid creations such as soups and sauces, although in a standard blender the vegetables would need to be cooked and softened beforehand. However, this is slowly changing. 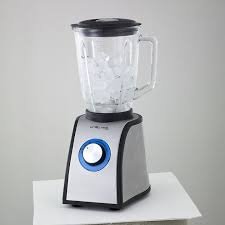 Increasingly these days there are high-powered blenders on the market capable of processing foods too. More and more blenders are now being released with changeable blade types, meaning that they can fulfil a wider range of functions. Some even come with various jugs designed to work with either solids or liquids.

Some blenders are just as capable of making cake batters and bread doughs as the average food processor. Others are even powerful enough to process tough items such as raw root vegetables.

Which to Opt For?

Although the fact that food processors tend to come with a range of blades and bowl sizes means that they are great for a whole range of different purposes, they are usually simply not capable of mixing liquids like a blender. 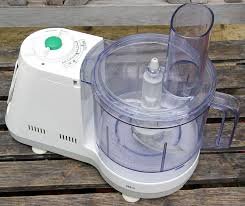 If you are trying to decide whether to invest in either a blender or a food processor, or both, the best solution would be to opt for a high-powered multi-functional blender that is capable of handling both liquids and solids. Not only will this save you money by buying a single device rather than two separate ones, it will also allow you to free up valuable cupboard space.

These days, there are plenty of high-functioning blenders on the market that are capable of a whole range of tasks above and beyond what a food processor is proficient at. Although these devices may cost a little more, they are well-worth the investment.